Fingerboards – sometimes known as “Tech Decks” (Popular brand), is a miniature replica of a skateboard. Fingerboarding is in short, when somebody uses, or “rides” a fingerboard (with the fingers).

Typically ridden with middle and index finger, people perform actual tricks replicated from skateboarding. The fingerboard deck is typically about 10 cm in length, with a width typically ranging from 25 to 34 mm. As with skateboards – the deck has grip tape on top and trucks with wheels mounted to the bottom of it, making it able to roll. 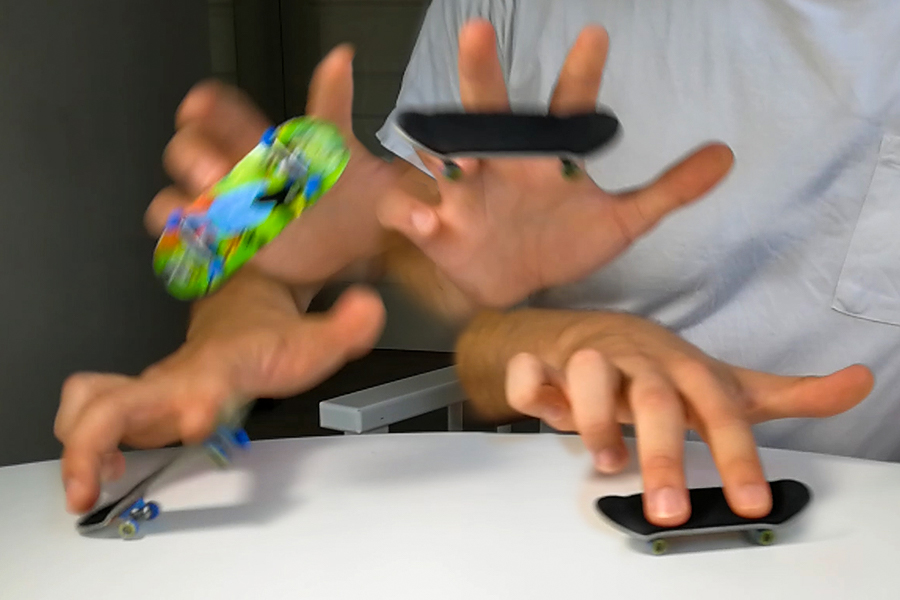 In a way, you can say fingerboarding is bringing the skateboarding culture to your fingers instead of your feet, making it possible to mimic the same tricks you did when skateboarding but by your desk this time. Miniature obstacles are often seen when people ride their fingerboards, such as miniature rails, stairs, boxes, ledges, ramps being vert ramps, half pipes, quarter pipes, kickers and so on.

So why fingerboard? This is a question that has many answers. Some people – like myself, have always (since child-age) been skate- and fingerboarding and simply just find it super cool! The way I personally got into fingerboarding was by breaking my left arm skateboarding (luckily, I am right-handed) and when the doctor told me “no skating for months”, I discovered fingerboarding and had loads of fun with it. A reason I find to use my fingerboard sometimes is simply to “take five minutes off” doing a couple of tricks by the desk, to “air out the brain” a little. Feels sweet, it’s fun!

The first fingerboards ever created was by skaters, making little “DIY” boards as toys in the 1980s era, where they were made of wood, tubes and toy train axles. Later the miniature boards were seen more as keychain attachments, however it wasn’t long until the Fingerboarding scene picked up in popularity and became a bigger part of the skateboarding industry in the 1990s.

The development did not stop from there, as in the past couple of decades the fingerboard scene has becoming more and more advanced. Both when it comes to the quality of the boards and the skill of the riders. Fingerboarding now has its scene of its own, spread out to various social media platforms such as YouTube, Instagram, Facebook etc. where “riders” continuously “out-do” themselves with more advanced tricks and new ways of presenting (often seen in videos and photos).

Fingerboarding eventually evolved from a “hobby toy”, to a lifestyle for some – competing in Championships and various rendezvous events around the world. Most riders of that calibre are usually involved in the retailing, promotion or production of fingerboarding related products.

Components of a Fingerboard

The early mass-produced fingerboards were “Tech Decks”, a complete fingerboard setup with a plastic deck, griptape, trucks made of metal with plastic wheels mounted to it. Later the replication of other types of decks with a more “old-school” shape and some wider versions were also seen. Much can be said about Tech Deck and one thing is sure, they helped fingerboarding evolve to where it is today.

Here are two pictures of what a Tech Deck could look like, versus a more modern professional complete setup. The difference? Quality, craftmanship and price. 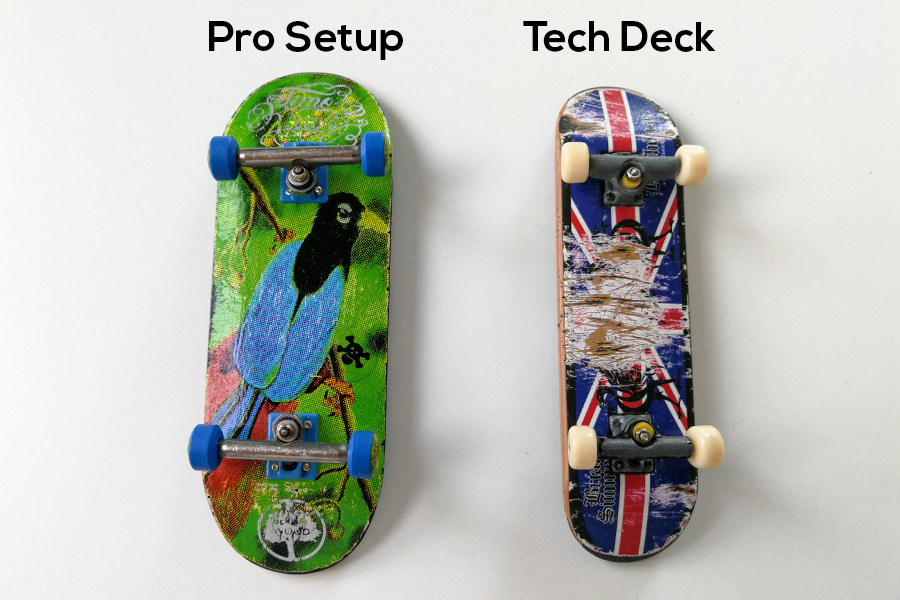 So, let’s “break the setup down” for an overview of each part, starting with the deck. The deck is the part of the complete board that you put your fingers on. It is the “main” part and is what makes it possible to “pop” your tricks.

Here is an example of what a wooden deck and plastic looks like: 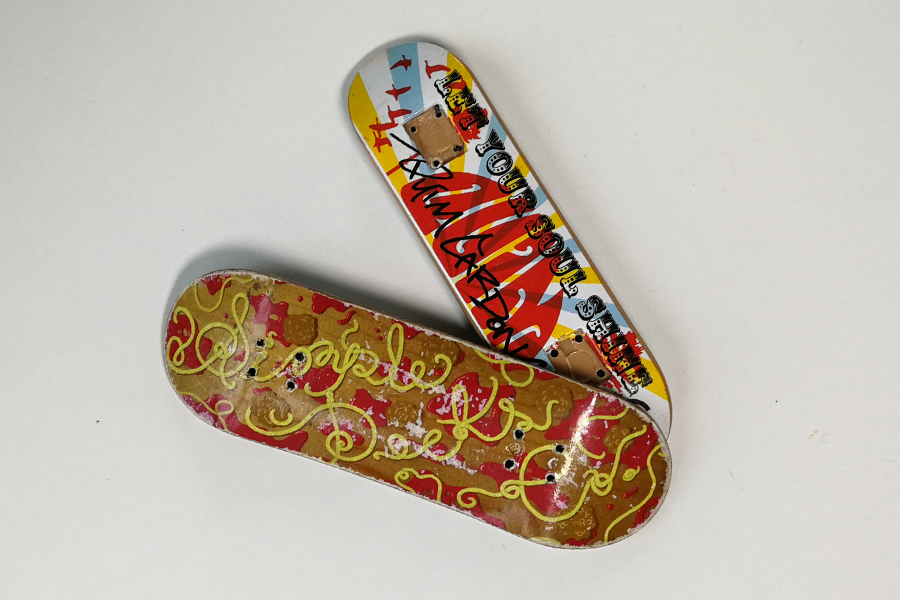 Most mass-produced decks were made of plastic back in the day, however nowadays you will be able to find mass-produced wooden decks of superior quality, offering a stronger pop with varying widths that would fit the riders liking. Most wooden decks nowadays are produced in a length of about 10 cm and a varying width between 28-34 mm typically. It was back in the 2000 era and forward where the mass-production of wooden decks started to pick up. The typical wooden decks were now made of quality veneer plywood, typically with 4-7 plies depending on the thickness of the plywood and the desired thickness of the end-product.

In each end of the deck we have what is called the “kicks”, which is called either “nose” or “tail”. They have different names because of the slight difference in shape, the nose kick usually being slightly “longer” than the tail. The kicks are crucial for “pop” and board-control and different deck companies produces decks out of their own unique molds, meaning that the height and steepness of kicks may vary from one deck company to the other. 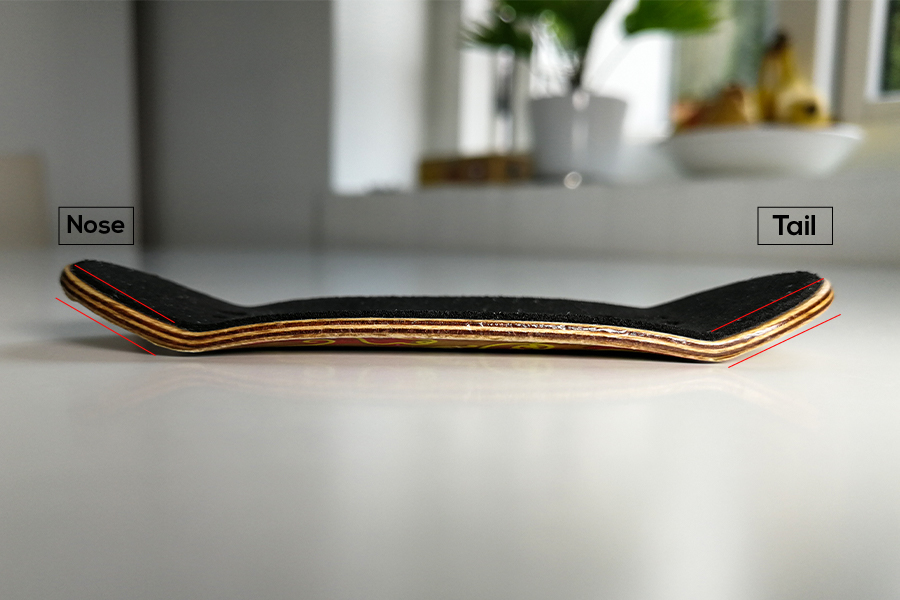 In the recent years, the width of decks has been increasing, with about one mm per year, giving us more choices to pick between today. However it seemed like they stopped it at maximum of about 34 mm in width, for now – that being the overall “standard shape” of a fingerboard, sure some oldschool shaped and custom decks could be wider.

In the small dimensional world of fingerboarding, a couple of milimeters more or less can really make a difference of how the board is to control while doing flip tricks: 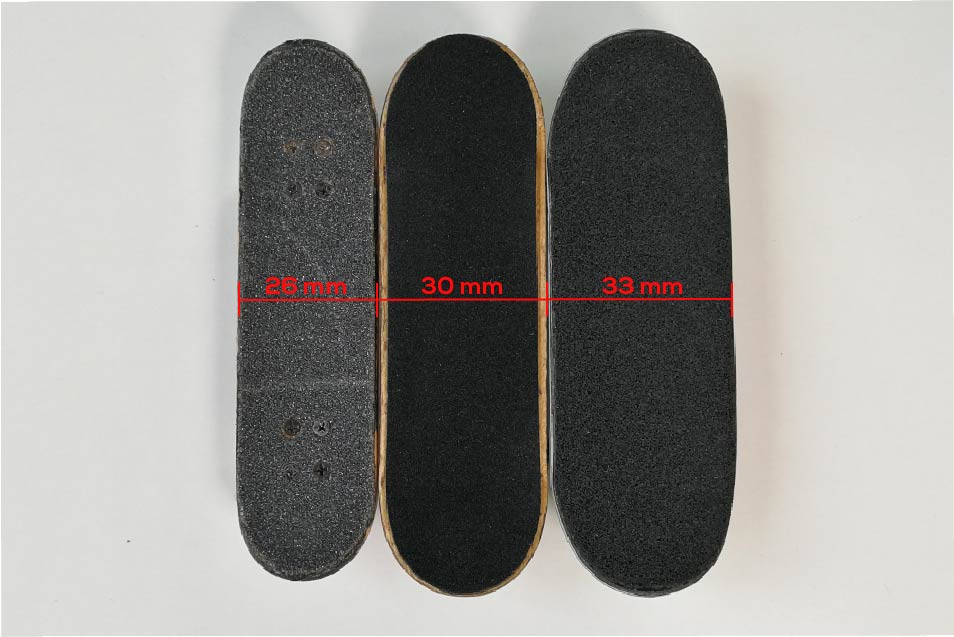 Another aspect of the deck is the “concave”. Concave means the “steepness” or “roundness” of the board, from the centre to the edges of the board. This is again a personal preference, some people like “low-concave” or “high-concave” molds – however the biggest “effect” of the concave steepness is the board-control. Some people feel that it flips a little easier with a high-concave, I am personally more into the “low-concave” molds.

The length of wooden fingerboards seems to be more “stable” overall. Often yes, a wooden deck will be some mm longer than a “Tech Deck” plastic deck, which keeps the shape of the deck in proportion and offers that extra bit of control – but usually we see the same lengths of wooden decks being about 100 mm.

The “Griptape” is what goes “on top” of the deck and offers more grip, making is easier to flip the board in the desired direction. Overall there is 2 broadly used versions of “fingerboard griptape” which is the “gritty” tape (left) and the “soft” tape (right). 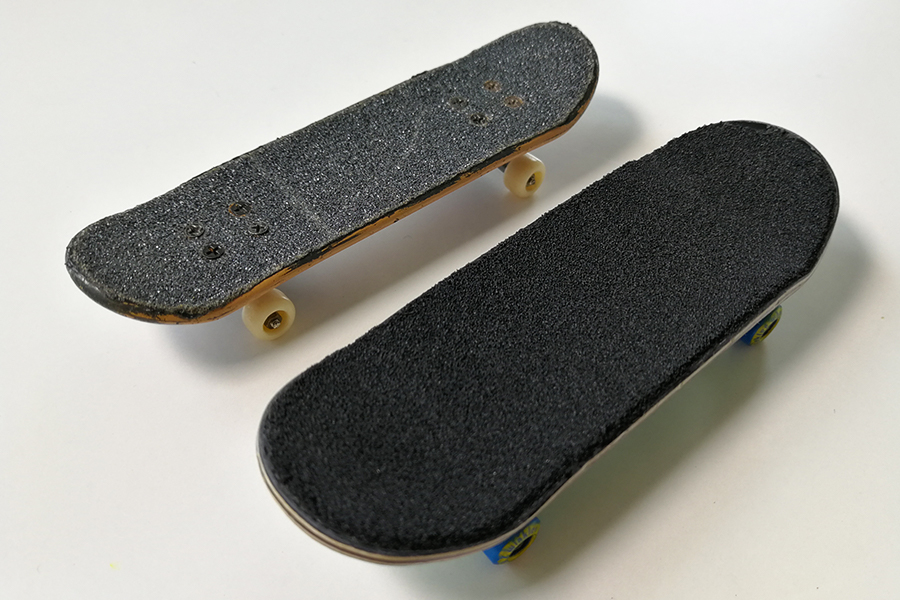 The “gritty” griptape is what is seen on a stock Tech Deck setup, with a gritty surface – just like the one on a skateboard (sandpaper-like tape). Sometimes skateboard griptape is cut into smaller pieces and applied to fingerboard decks, as it can be more grippy then the “stock version” griptape of “Tech Decks”.

The “soft” foam-like tape is what is seen on most “high-end” fingerboard setups. Instead of being gritty, it is soft and “foamy” (usually 1 mm thick), offering even more grip than the typical “gritty” griptape. The soft type of tape was made for fingerboarding and is by far the “best” option, being more comfortable and grippy. Most times when a soft tape like this is applied to the deck, it needs to be “worn in” simply by using it – giving even more grip.

The two trucks are what is mounted to the bottom of the board, holding wheels and deck together. They are used to keep the complete board together for rolling and as points for “Grinding”, when performing a trick that makes the truck glide directly against the edge of a curb or rail.

Trucks can be separated into two main parts, being the baseplate and the hanger, being the top part of the truck. These two parts are kept together by the kingpin on the baseplate, with bushings to even out the gaps in between. Typically, on a stock Tech Deck the bushings are little hard plastic discs, however other options are available being rubber bushings and washers instead – making a more “loose truck style” possible.

A very common thing to do is to use “Tech Deck” trucks on a wooden fingerboard, however many other options are available which is important when it comes to fitting the trucks to the width of the deck. The axels of the fingerboard trucks (those that holds the wheels) should be flush with the edge of the deck, meaning that a pair of “stock Tech Deck trucks” are most likely going to be too “slim” if mounted on a “super-wide” 34mm deck.

The width of “stock” Tech Deck trucks is usually about 25 mm (including axels), however a Tech Deck “Wide Truck” can also be found being about 30 mm. Tech Deck trucks are absolutely a valid choice for a “budget setup”, and they don’t have to stay boring and grey. A lot of times you would see fingerboarders having painted and reshaped their Tech Deck trucks by sanding them, which also made them even more light-weight. More advanced options are available today, produced with millimetre-precision for fitting wheels perfect on the axel and the overall width of the truck fitting the width of the decks. Taking quality, realism and craftmanship to new heights.

Non-bearing wheels are what can be found on the typical stock Tech Deck setup. They are simply made of hard plastic and do not roll very smoothly.

Bearing wheels are wheels that has an actual bearing in the centre of it, making it roll so much smoother. It makes a HUGE difference for the feeling of “riding” the complete board in the end. 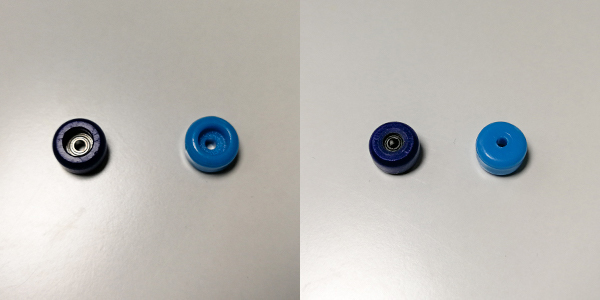 The hardware used to keep all the parts of a fingerboard together are often referred to as “Tuning”. Tuning can include:

Fingersnowskating has been seen in the fingerboard community as well. Replicating “snowskates” which is put simply, a skateboard without trucks or wheels, meant to be ridden in the snow. In other words, a smaller version of a snowboard where your feet are not strapped in and locked, meaning that tricks like “Ollie” and “Kickflip” can still be performed. People fingersnowskating would often take the deck of a Tech Deck and ride it in the snow.

FingerAirBoarding is like a fingerboard deck alone but made in a wider version. The force of air/wind is used to keep the board on the fingers, where tricks are done by pushing the board in different directions against the wind.

Handboarding is another example of a “miniature skateboard” but instead of doing tricks with the fingers, you use both your hands at the same time. The handboarding scene never reached the same level of popularity as fingerboarding so far, one aspect could be the practicality of it – requiring more space compared to fingerboard.